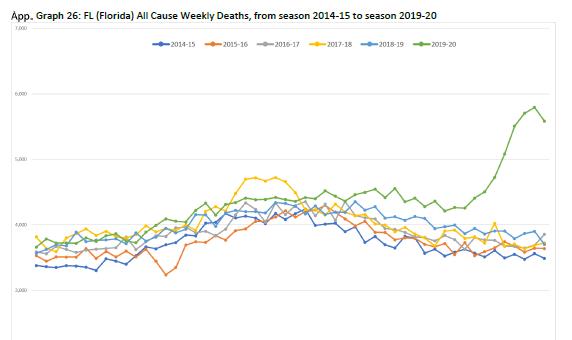 Briand provides a graph like this for all 50 US States plus New York City, showing weekly deaths with lines of different colors for each year.  The green line shows weekly mortality for Florida from August 2019 to August 2020.  Although Florida had milder social isolation policies, such as opening schools sooner than many states and resisting mask mandates, they did not have any increase in mortality until the summer of 2020.  Claims that strict measures would "flatten the curve" appear false, especially when compared to regions that had very harsh mandates, such as New York City , New jersey, and Rhode Island which all had sharp peaks starting immediately after WHO declared a pandemic.  Florida has one of the highest percentages of people with advanced age and fragile health in the United States, so would be expected to have significant impacts on mortality no matter whether the cause was a new virus or due to an overly aggressive pandemic response, and this is likely one reason for the summer increase in weekly deaths.  Most states did not have increased peak weekly mortality over prior years in any month, including all seven states that never issues stay-at-home orders (Arkansas, Iowa, Nebraska, North Dakota, South Dakota, Utah, and Wyoming), and most of these seven states actually had lower peak weekly deaths than in prior years.
Florida did isolate long-term care residents, just as all other states did.  The long-term care understaffing crisis that occurred everywhere around the world is a likely cause for most of these increased deaths, and over half of the increased mortality in 2020 occurred in residents of long-term care facilities.  Rancourt et al provide a thorough discussion of response-caused deaths in section 4.5, “Regarding Causes of Response-Induced Deaths” (Pages 41-46).  At the top of page 43 begins an excellent summary of effects of the "unprecedented strict mass quarantine and isolation of sick and healthy elderly people" as a "main cause of the 'covid-peak' in Canada." (Page 43-46).  They later state: “We conclude that the ‘covid-peak’ was palpably induced by the pandemic response” (Rancourt et al, Page 47).
The summer of 2020 had another cause for rising deaths, which Briand and Rancourt et al document and discuss.  There was a marked increase in deaths from suicides, drug overdoses, and homicides in the summer of 2020, especially in young males, as shown in Briand's graph of US mortality from non-natural causes.
Powered by