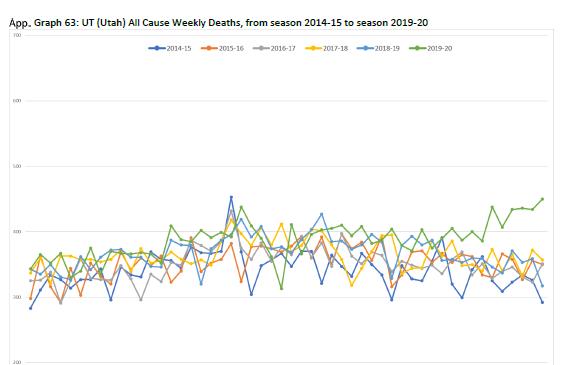 Briand provides a graph like this for all 50 US States plus New York City, showing weekly deaths with lines of different colors for each year.  The green line shows weekly mortality for Utah from August 2019 to August 2020.  Although there is an anomalous late increase in mortality in July and August, it does not reach as high as the 2014-15 peak shown in blue.  This lack of increase over prior years was true for all seven states that did not issue stay-at-home orders.  Briand and Rancourt et al both show that a late rise in deaths from suicides, drug overdoses, and homicides occured in many states in summer 2020, as shown in this graph of mortality from non-natural causes.  Even though the summer rise in Utah was not higher than the 2014-15 peak, it is higher than the other states with no stay-at-home orders, and may have been increased by other aspects of the overly aggressive pandemic response.  This graph looks extremely mild when compared to places like New York City which had the most severe understaffing crisis of any region, or Michigan.  Ironically both New York City and Michigan were praised by Anthony Fauci for their aggressive social isolation mandates.
Utah's rise in weekly deaths in the summer of 2020 was not unique.  Briand and Rancourt et al both document that there was a marked increase in deaths from suicides, drug overdoses, and homicides in summer 2020, as shown in Briand's graph of US mortality from non-natural causes, which is a significant factor in the anomalous summer increases seen in many states and in Canada.
Powered by