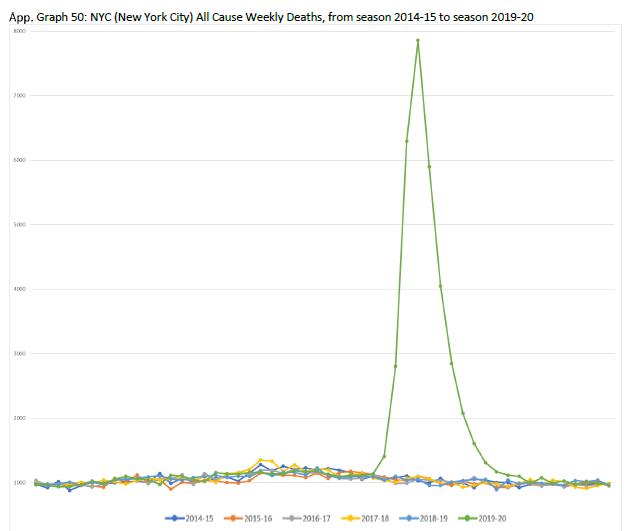 Briand provides a graph like this for all 50 US States plus New York City, showing weekly deaths with lines of different colors for each year.  The green line shows New York City's mortality from August 2019 to August 2020.  Most states had mild or no increases in weekly peak deaths when compared to prior years, including all seven states that never issues stay-at-home orders, and many had less than in prior years, including South Dakota and Iowa.  However, this graph of New York City shows a remarkable increase starting immediately after the WHO declaration of a pandemic which occurred almost exclusively in the very elderly and in people with fragile underlying health, over half of them in residents of long-term care facilities.  The standard number of weekly deaths increased over an 8 week period from mid-March to mid-May 2020, with an extra 7000 deaths at its peak.  This was the most extreme example of increased mortality of any region in the United States, and yet the city was initially praised for its strict social isolation mandates by advocates of these policies such as Anthony Fauci (Jones 2021).  It was also sad that these people, who already had a limited life expectancy, were deprived of the company of loved ones during this time.
New York City was infamous for its nursing home crisis, perhaps better described as a "catastrophe" with severe understaffing.  However, these problems in New York City also occurred in tens of thousands of elder care facilities across the globe, starting in March 2020, immediately after the WHO and governmental proclamation of a pandemic.  A simple analysis of the evidence shows that this crisis was most likely caused by the spreading of exaggerated fears of covid-19.  Rancourt et al summarize this evidence thoroughly in section 4.5, “Regarding Causes of Response-Induced Deaths” (Pages 41-46).  At the top of page 43 begins an excellent summary of effects of the "unprecedented strict mass quarantine and isolation of sick and healthy elderly people" as a "main cause of the 'covid-peak' in Canada." (Page 43-46).  After this section they state: “We conclude that the ‘covid-peak’ was palpably induced by the pandemic response” (Rancourt et al, Page 47).  Regarding the simultaneous increases in weekly deaths occurring thousands of miles apart they state “We believe that it is not a coincidence that all the “covid peaks” started their sharp and sudden surges immediately (within 1 week or so) after the WHO’s March 2020 pronouncement of a pandemic.  We believe viruses did not suddenly everywhere act on cue” (Rancourt et al 2021).  ​
Powered by