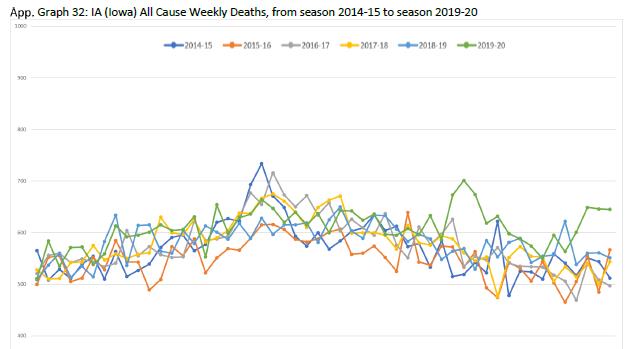 Briand provides a graph like this for all 50 US States plus New York City, showing weekly deaths with lines of different colors for each year.  The green line shows weekly mortality for Iowa from August 2019 to August 2020.  Iowa had lower peak mortality than it did in the 2014-15 and 2016-17 seasons, despite milder lockdown measures than most other states.  Iowa was one of seven states which never issued a stay-at-home order (Ballotpedia, 2021), and all of these seven had lower peak mortality in 2020 than in prior years.  However, in an Orwellian reversal, Iowa was attacked by the major media including a Washington Post headline accusing it of being a state that "does not care if you live or die" (Lenz 2021).  Many other states with good outcomes were also harshly criticized, such as South Dakota, while many with high mortality were praised for their harsh social isolation mandates.  For example Anthony Fauci said Michigan had "a really good governor" and praised New York City early on for the aggressive social isolation policies (Jones 2021).  Please compare the graph above to the graphs for weekly all-cause mortality in New York City and Michigan.
Iowa had a moderate rise in weekly deaths in late April, unlike other states, and again in the summer of 2020, at the far right of the graph, but both are below the peak deaths in 2014-15 and 2016-17.  This April rise in Iowa is not seen in other states, but the summer rise is common.  Briand and Rancourt et al both document that in the summer of 2020 there was a marked increase in deaths from suicides, drug overdoses, and homicides, as shown in Briand's graph of US mortality from non-natural causes.  This is a significant factor in the anomalous summer increases seen in many states and in Canada.
Powered by