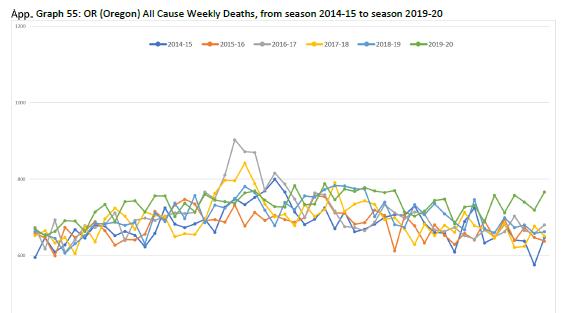 Most states with strict isolation policies had high mortality, but not all of them.  Oregon is an example, with no significant increase in mortality, similar to states that did not ever issue stay-at-home orders and had minimal social isolation policies such as South Dakota and Iowa.  However, Iowa and South Dakota were harshly criticized by the media and by isolation advocates such as Anthony Fauci and Scott Gottlieb (Czachor 2021, Jones 2021, Lenz 2021, Mayer 2021).
Briand provides a graph like this for all 50 US States plus New York City, showing weekly deaths with lines of different colors for each year.  The green line shows weekly mortality for Oregon from August 2019 to August 2020.  ​Oregon was ranked #4 in the US in affordable senior living and healthcare (Wong 2016), and may have also had successful interventions to limit the long-term care understaffing crisis which affected the whole world, sometimes extremely severely such as in New York City.  These factors likely account for the lack in any increase in mortality in Oregon despite relatively strict social isolation policies.
Oregon had a moderate rise in weekly deaths in the summer of 2020, at the far right of the graph.  Briand and Rancourt et al both document that there was a marked increase in deaths from suicides, drug overdoses, and homicides in summer 2020, as shown in Briand's graph of US mortality from non-natural causes, which is a significant factor in the anomalous summer increases seen in many states and in Canada.
Powered by